As of 2014, per the latest available report from the Centers for Disease Control, 3.7 percent of American adults use e-cigarettes, more than 9 million people. That’s a lot of electronic “vapes.” And so the question arises: Do e-cigarettes require hazardous waste disposal?

In a word: Yes. And although everyone has likely seen an e-cigarette by now, the approximately 313 million Americans who don’t use them probably have only a vague sense of how they differ from conventional cigarettes—let alone the pollution problem they can present.

Broadly speaking, e-cigarettes have three main components: a cartridge that holds the flavored nicotine “vaping” solution, a heating element, and a lithium ion battery. The user draws on the e-cigarette as she might a conventional smoke. This activates a microprocessor that modulates the heating element, vaporizing the solution, and thus producing a flavored nicotine aerosol that provides a sensation akin to smoking when inhaled.

Conventional cigarette butts comprise approximately 38 percent of litter worldwide; and conventional cigarette filters are made of cellulose acetate, which takes about 12 years to biodegrade into its more ecologically benign constituents. So e-cigarettes are doubtless more eco-friendly than their conventional counterparts. But two “vape” components—the cartridge and the lithium ion battery—require hazardous waste removal.

Once expended, “vape” cartridges that held the flavored nicotine solution are typically discarded. However, without proper hazardous waste disposal, cartridges with residual solution pose a threat to domestic pets and wildlife, should the residual nicotine find its way into the environment, and even to children, should they find the expended cartridges and play with them.

On the consumer level, many e-cigarette manufacturers and vendors nowadays offer recycling programs, with the incentive of discounted or free products for so many “vapes” returned for reclamation. This is an easier path to eco-friendly behavior than doing it yourself.

According to most authorities, the proper disposal of e-cigarette cartridges requires removing the filler material, rinsing it under running water until all nicotine residues are removed, and then wrapping it in a scrap of biodegradable material. The cartridge itself should be similarly rinsed and then sealed with its original plug. Only then can it all be discarded as you would any other plastic waste.

For commercial and industrial enterprises, many jurisdictions stipulate that any discarded waste containing any concentration of nicotine requires hazardous waste management, and the rules can be severe. For example, in Minnesota, there is no minimal amount or concentration of nicotine-containing material that is exempt from regulation, and specified e-cigarette waste includes but isn’t limited to:

For retail consumers, the EPA doesn’t regulate the disposal of batteries in small quantities, although local jurisdictions might have specific rules for electronic waste disposal. This is because it’s dangerous to toss lithium ion batteries into a trash or recycling bin. How so?

According to their manufacturers, safe disposal of lithium ion batteries requires ensuring that  they’re fully discharged and cooled, then submerging them in cold saltwater for two weeks—covered securely with a lid—before wrapping them in newspaper and placing them in the trash.

Again, the easier path is to take advantage of recycling programs offered by e-cigarette manufacturers and vendors. Alternatively, you can check with your municipality regarding guidelines for electronic waste disposal; or you can visit one of the many electronic retail stores that offer battery recycling as part of their brand (e.g. Best Buy).

For commercial and industrial users, the recycling of large quantities of batteries is regulated under the Universal Rules of Hazardous Waste regulations (40 CFR PART 273), which are imprecise enough about batteries to require careful interpretation and expert advice. Some things you’ll need to determine:

Hazardous Waste Experts can provide you with affordable nationwide service for disposing of vape waste. For a fast and free price quote call us at (888) 681-8923.

For the estimated 36.5 million American adults who are addicted to smoking or otherwise crave nicotine, e-cigarettes are patently safer than smoking tobacco, and their leftovers represent less of an ecological risk than the estimated 4.5 trillion cigarette butts that find their way into the worldwide environment every year.  Nonetheless, e-cigarette leftovers are not benign, and in quantity require expert advice about hazardous waste management. 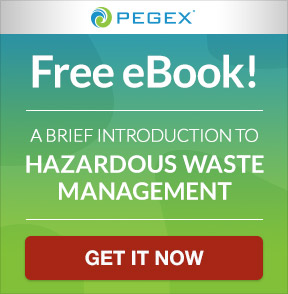